Lugworm has to be one of most popular sea baits nationwide. It is especially popular in Merseyside and North Wales. This is probably because we have such a good supply of them and the baits itself often produces the best catches!

There are two different species of Lugworm; Blow Lug and Black Lug- both are extremely good baits. Black Lug is especially good as it can be easily frozen to be used at a later date, because of this Black Lug is more popular as shops can keep a steady supply of it even when tides are low and no one is digging. 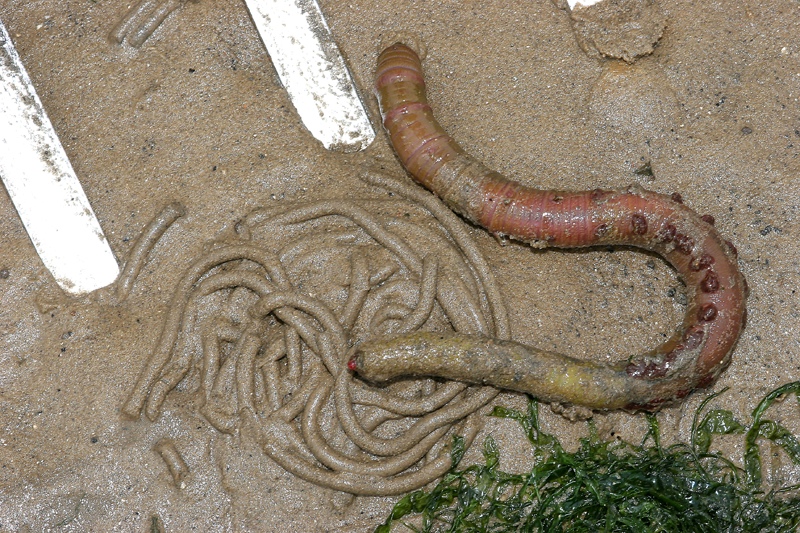 Black Lugworm: has tougher skin making it easier to bait up as it doesn't break up as easily and tends to hold together better on the cast. It is still advisable to use bait elastic to bind the worm to the hook. The worm can be whole, halved or with several bound together- depending on the fish you are targeting. The bigger the mouth, the bigger the bait. Black Lugworm works well with many different species, such as: Cod, Whiting and numerous flatfish (eg. Plaice, Dabs), that being said most species will find it hard to turn away a good worm bait. Lugworm can often be expensive due to the work involved in collecting it, this being so; it may be a good idea to bulk your worm bait out with a fish bait also. Known as a 'cocktail' bait try also binding Sandeel or Squid to you worm. If you struggle baiting up a baiting needle can come in very handy and make it a lot easier- YouTube videos on baiting up techniques. There are also useful tips for if you are using frozen Lug- one of the best being to pour boiling water over the worm then submerge them in cold water, you will find that this keeps the worm nice and plump and easier to bait up with. My favourite way is to use the worm still frozen, I will usually use whole or half worms and whip them straight onto the hook frozen. I find that by doing this the worm thaws out in tide and the scent is greater instead of the worms, and it's juices, thawing out into the paper it's wrapped in. Black Lug are often larger than Blow Lug and their cast in the sand is different a Blow Lug often has a spiral cast were-as Black Lug have more jumbled, forced out look. Black Lug often burrow deeper into the sand especially in colder months and can hard to get to. Often they are at the furthest low water marks and their beds can only be reached on larger tides.

Blow Lugworm- can be a very delicate bait and can break or burst when baiting up, greater care must be taken to avoid this. Blow Lug do not freeze well due to being delicate, they are also harder to keep fresh. The best way is to keep them in shallow fresh sea water and to change it regularly. For this reason most people choose to dig Blow Lug themselves before fishing and to use them straight away, throwing back any that they do not use. This fresh bait can often prove to be the best bait imaginable- especially when using it where you dug it. This seems to be a favourite of Bass, I have caught more Bass on fresh Blow Lug than any other bait- it is also extremely good for flatfish. There aren't many better feeling when fishing than to catch a fish on bait that you have collected yourself.

Digging for Lug- Blow Lug are often shallower than their counterparts. And for this reason are often easier to collect- a Lugworm bait pump or garden fork can both be used when the worms are shallow. I highly recommend watching YouTube tutorials before giving it a go and preferably go with someone who has done it before. Black Lugworm can be more difficult to find, often being upto 2ft deep and are also often only found at the furthest low water marks on spring tides. This is when it is essential that you have extremely good local knowledge as it can be extremely dangerous reaching low water marks! Make sure you do your research before you give it a go.

Thank you for reading- keep an eye out for future Sea Fishing Blogs. I will be doing reviews on different marks.

Be one of the first to recieve Ridgemonkeys NEW Hunter 750 boat, Order Now to secure yours

Shop now the most popular items from our Predator ranges

Do you fish in the UK?

Fantastic, then this is the newsletter for you!